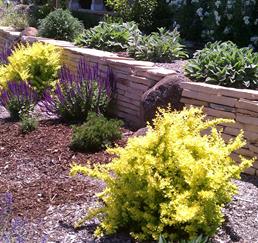 Few plants rate as high for instant “pop” or curb appeal than Berberis thunbergii ‘Aurea’ or Golden Japanese Barberry.  This deciduous small shrub from Japan is a people stopper when planted in a front yard.  Vivid bright golden yellow leaves are enough to stop someone in their tracks to don sunglasses on a clear day in early spring.  The leaf color is carried though the entire growing season but does fade to a more chartreuse color.  This well behaved plant grows to about 3′ tall and as wide and is often called a barrier plant because of the sharp spines up and down all stems.

Berberis thunbergii ‘Aurea’ is at its brightest in full sun but the leaves can burn a bit as temperatures get into the 90’s.  It will also tolerate some light shade.  Regular garden water is preferred as well as regular fertilizing.  Pruning if needed can be done in winter before the new leaves emerge – usually just to shape the plant.  It is deer tolerant as the new leaves may be nibbled on before the spines harden.  One or two applications of a deer repellant is usually enough to keep deer away.

To create instant curb appeal, try planting Berberis thunbergii ‘Aurea’ – but be sure to have a pair of sunglasses handy.

Overhead Or Drip Irrigation: What Offers the Most Value?
How Can I Create a Low-maintenance Yard?